Stream bank sources of phosphorus (P) have not been quantified in Iowa. This despite the fact stream banks are known to be a potentially large source of stream sediment, estimated at approximately 40-80% of annual sediment loads.

As part of another project, methodology recently was developed to identify severely eroding segments located along river systems in Iowa using high-resolution LiDAR topographic data. This project will use this new information to expand on the evaluation and quantification of P loads in Iowa rivers.

Two main components comprise the two-year project. One is to develop seasonal and annual estimates of total and dissolved P loads in Iowa rivers using existing load estimation programs, plus new methodology based on continuous turbidity measurements. The second is to conduct field and desktop analyses of soil P concentration measurements and annual bank erosion rates. The outcomes from the two components will be combined to estimate annual total P loads from stream banks, and the portion of total P loads in Iowa rivers due to stream bank erosion.

To address research question #1, we estimated total phosphorus (TP) loads in 46 Iowa rivers for the period 2000-2017 using two different USGS load estimation methods. The results were reported in a paper entitled "Total Phosphorus Export from Iowa Agricultural Watersheds: Quantifying the Scope and Scale of a Regional Condition" published in the Journal of Hydrology.

Mean and median TP yields varied considerably, ranging from 0.44-7.71 kg/ha and 0.32 to 3.75 kg/ha, respectively. Mean values were clearly influenced by maximum annual TP loads which exceeded 10 kg/ha in 14 different watersheds. Highest median TP yields were found in western and southern Iowa, with yield from many watersheds exceeding 2 to 3 kg/ha, whereas in the flatter and more recently glaciated regions of north-central Iowa, median TP yields were often less than 1 kg/ha. Overall, the weighted average TP yield for Iowa was 1.70 kg/ha (median 1.40 kg/ha), ranging from 0.37 to 4.95 kg/ha and Iowa’s TP export contributes approximately 15% of the TP load to the Gulf of Mexico.

To address question #2, researchers developed 1) new GIS methodology, 2) assessed streambank recession rates, 3) sampled streambank soils and 4) quantified the contribution of streambank erosion to annual TP loads. Highlights of the findings related to each area of the research include:

1) A new approach to mapping eroding streambanks at a regional scale was developed using high resolution Light Detection and Ranging (LiDAR) elevation data. By calibrating field mapping studies to LiDAR derivative data, the extent of severely eroding streambanks in 3rd-6th order streams and rivers found in Iowa was estimated. Study results suggest that over 35,200 km of streambanks may be severely eroding, or approximately 41% of all 3rd-6th order streambanks. The extent of streambank erosion was not uniform across the state with more erosion occurring in hillier western and southern Iowa compared to flatter and more recently glaciated northern Iowa. Streambank erosion was related to greater bank heights and was more prevalent (as a percent of the total stream length) in larger 5th and 6th order rivers.

3) Streambank soils from 145 different streambanks of 1st-7th order streams and rivers in Iowa were sampled and analyzed for particle size, bulk density and TP concentrations. Results in that TP concentrations ranged from 109 to 1569 mg/kg and averaged 470 mg/kg. 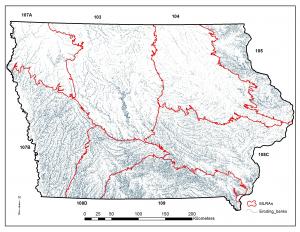 During the Jan to June reporting period, several publications were prepared and submitted to journals. Topics reported on included the estimated TP loads and yields from 46 Iowa watersheds, including a meta-analysis of pin data and original work of stream migration rates in Iowa rivers. The total TP loads provide the backdrop to compare newly calculated streambank TP export. In August 2019, streambank soil TP concentrations were finalized by the NLAE laboratory and compiled as state average concentrations. The results suggested that approximately 33% of Iowa TP loads may be derived from streambank erosion.

In September 2019, the project results were summarized for a presentation to the
International Association for Hydro-Environment Engineering and Research World Congress meeting in Panama and highlights were presented to the INRC advisory board.

Work continues with the Agricultural Research Service to analyze the bank erosion samples for P forms. This quarter, total P loads were calculated for 46 Iowa watersheds for the 2000-2017 period using two load estimation programs LOADEST and WRTDS. Results of this aspect of the P project were compiled and reported in a new paper submitted to the Journal of Hydrology, “Total Phosphorus Export from Iowa Agricultural Watersheds: Quantifying the Scope and Scale of a Regional Condition.”

The abstract of the paper reads: Total phosphorus (TP) export in rivers contributes to development of hypoxia conditions receiving waterbodies and is typically sourced to agricultural nonpoint sources. Systematic quantification of TP loads and yields at a regional scale is not often reported but TP yields are known to vary considerably. In this study, TP yields from 46 Iowa watersheds were evaluated for the period from 2000 to 2017 to evaluate long-term patterns of TP export and quantify the contribution of Iowa-sourced TP loads to the Gulf of Mexico. Using two common load estimation programs, annual mean and median TP yields ranged from 0.44 to 7.71 kg/ha and 0.32 to 3.75 kg/ha, respectively. Highest median yields were found in western and southern Iowa. The weighted average TP yield for Iowa was 1.70 kg/ha and, on average, Iowa’s TP export contributes approximately 15% of the TP load to the Gulf of Mexico. Annual TP yields in Iowa were positively correlated to precipitation, basin slope and stormflow, and negatively correlated with row crop, manure application areas, tiled soils and baseflow. Reducing TP export will require improved quantification and differentiation of sources of TP loads in Midwestern rivers and a commitment to find strategies that reduce both TP and NO3-N loss from agricultural lands in a complementary and additive approach.”

In August, all of the sampling of banks was completed. Bulk densities were measured. Currently, the samples are being analyzed for phosphorus. Work continues this quarter to complete Weighted Regressions on Time, Season, and Discharge  (WRTDS) models of phosphorus loads.

In June, a sampling strategy was finalized that will collect soil samples at nearly 300 stream bank sites. The sites were selected by using a GIS tool that overlaid eroding stream banks with public lands in Iowa. Over 22,000 eroding banks were identified, and random samples were chosen from each of eight major land resource areas (MLRAs) and from each of eight stream orders. Samples will be analyzed for phosphorus and bulk density as they are obtained throughout the next quarter. Work continues this quarter to complete Weighted Regressions on Time, Season, and Discharge(WRTDS) models of phosphorus loads.

Data has been compiled and a model is being run in 47 watersheds across Iowa. Field sampling for stream bank phosphorus is scheduled to begin in May.

A joint sampling effort collected more than 300 feet of soil core from eroding stream banks in the Loess Hills landform region near Oakland, Iowa. These soil cores are being studied to differentiate the geologic parent materials. Once these descriptions are complete, the samples will be analyzed for phosphorus content.