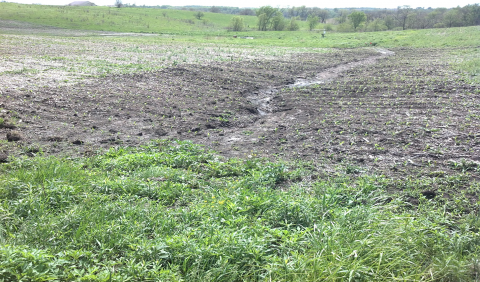 A second task of this grant was to define a mapping procedure to delineate permanent vegetation along streams that represents the riparian zone. Automated methods using imagery, NDVI and proximity to streams generated vegetation polygons far beyond the riparian zone especially in more forested areas of the state. Ancillary data such as alluvial soils and landscape position were tested to see if they improved the riparian designation. Alluvial soils were shown to be helpful but the process still required a staff person to review the preliminary results and make data modifications. This process proved faster than manual digitizing and provided more repeatable and consistent results however, it required good resolution spring CIR imagery.

About a year after this portion of the project was completed, QA/QC conservation practice data was made available for public download as it was reviewed and finalized at https://www.gis.iastate.edu/gisf/projects/conservation-practices. The entire statewide dataset was finally completed and online in May 2019.