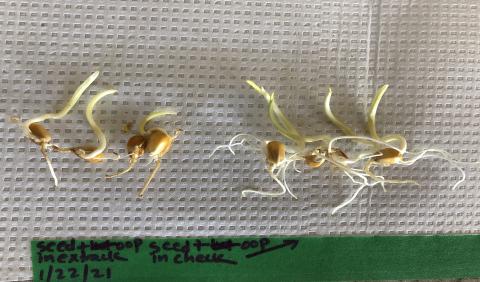 Corn yield reduction following a cereal rye cover crop has been attributed to, amongst other factors, allelochemicals released from decomposing cereal rye residue. Allelopathy is a complex biological process including interaction between two plants in which one plants release chemical compounds that influence the development and the growth of the other plants, prepares plants to increase its survivality through defence mechanism. Allelochemicals also affect plant-microbiome interactions. We are conducting studies in the lab to understand if if allelopathy may play a role in seedling disease. In our first study we  evaluated the effect of 6-Methoxy-2-benzoxazolinone (MBOA) on corn seedling growth, mycelial growth of seven pathogenic species of Pythium and root rot of corn seedlings caused by Pythium species. Greater root rot severity in corn was observed on corn seedlings grown in the presence of Pythium lutarium, P. oopapillum, P. torulosum and P. spinosum on media amended with MBOA. These data suggest that corn seedling disease caused by Pythium species could be more severe when corn is planted following a cover crop of winter cereal rye due to the presence of allelochemicals that are released from the cover crop. We are now repeating this experiment using root extracts from rye.