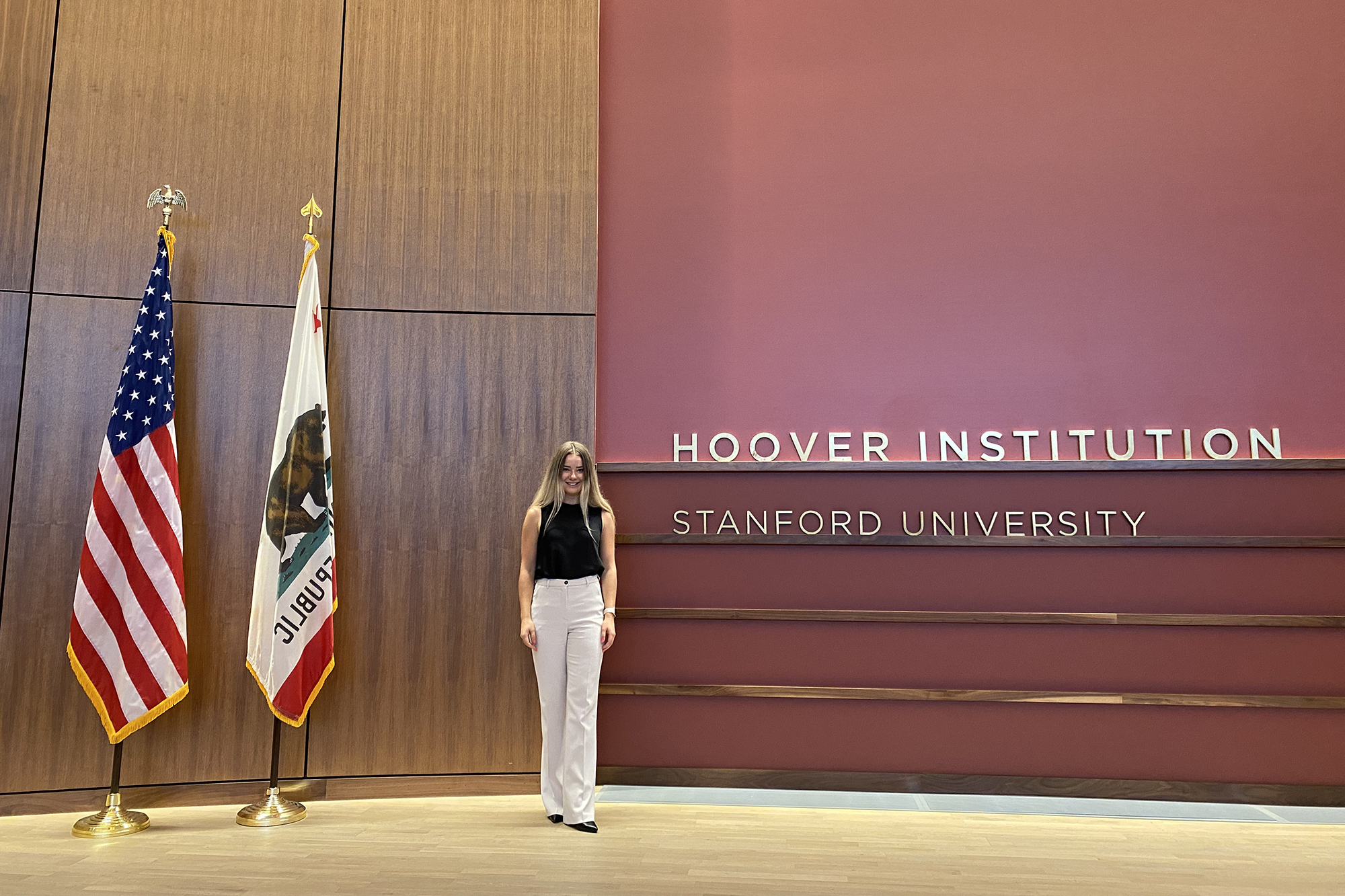 The Hoover Institution is located at Stanford University, and it was established by former President Herbert Hoover in 1919. What began as a library of documents and materials from WWI, the Hoover Institution has since transformed into a foundation for bipartisan research on economic prosperity and personal freedom.

Since coming to Iowa State, Campbell has been an eminent leader on campus. The former student body president resonates with the Hoover Institution’s values and is an avid listener of the organization’s “Uncommon Knowledge” podcast. Therefore, she was eager to apply to HISPBC for the opportunity to learn from Hoover fellows and witness operations at the institution first-hand.

“I’ve always had an interest in policy and understanding how decisions are made, what information is being considered, and who is making them,” Campbell said. “The economic and policy-based approach to decision making they teach at HISPBC really caught my eye, and I thought it would be fascinating to go.”

After arriving at Stanford’s campus on Aug. 14, Campbell spent the next four days attending sessions by world-renowned scholars and researchers. The program followed an intensive schedule to cover a wide array of topics including military policy, intellectual property protection and cyber security.

At one of the sessions, Condoleezza Rice, director of the Hoover Institution and a senior fellow on public policy, spoke about our country’s international relations and global hot spots. Rice, who previously served as the United States Secretary of State, analyzed the war in Ukraine from an economic and humanitarian perspective. Campbell was impressed by her outlook on the situation.

“Director Rice is fabulously well-spoken,” she said. “It was really impactful to hear from her about what it might look like going forward from this war as it relates to agriculture, such as the rising wheat prices and skyrocketing chemical and fertilizer prices.”

Another lecture that stood out to Campbell was presented by H. R. McMaster, senior fellow at the Hoover Institution. He suggested policymakers reflect on our nation’s history to make positive changes for the present and future. Campbell said this concept, as well as the importance of using data to drive decision making, were two of her biggest takeaways from HISPBC.

In addition to learning from speakers, Campbell also learned from her peers. Every evening, HISPBC participants broke into small groups led by teaching assistants to debrief the sessions held earlier in the day. With more than 100 people from across the U.S. and places like Denmark, Mexico and China, these groups were very diverse, and many topics were debated. Campbell found the activity inspiring.

“There was no hostility in these debates, but rather a sharing of viewpoints that we have based on our own lived experiences,” she said. “The best thing that came out of the week was getting to engage in these respectful and thoughtful conversations.”

While most conversations at the conference focused on national and international public policy, some hit a little closer to home. Campbell, who grew up on a seventh-generation farming operation near Dewitt, Iowa, was one of the only HISPBC participants with an agricultural upbringing. She considered this an opportunity to share her story.

“One night at dinner, I had the chance to show my table photos of our family farm, like my dad driving our combine,” Campbell said. “It meant a lot to me to offer my perspective of agriculture to them and speak for the industry in that space.”

Campbell also thought it was special to go to HISPBC from the same home state as Herbert Hoover. The institution maintains the original mission statement Hoover declared in 1959, and Campbell hopes she can demonstrate his determination to improve public policy and human condition in her own career.