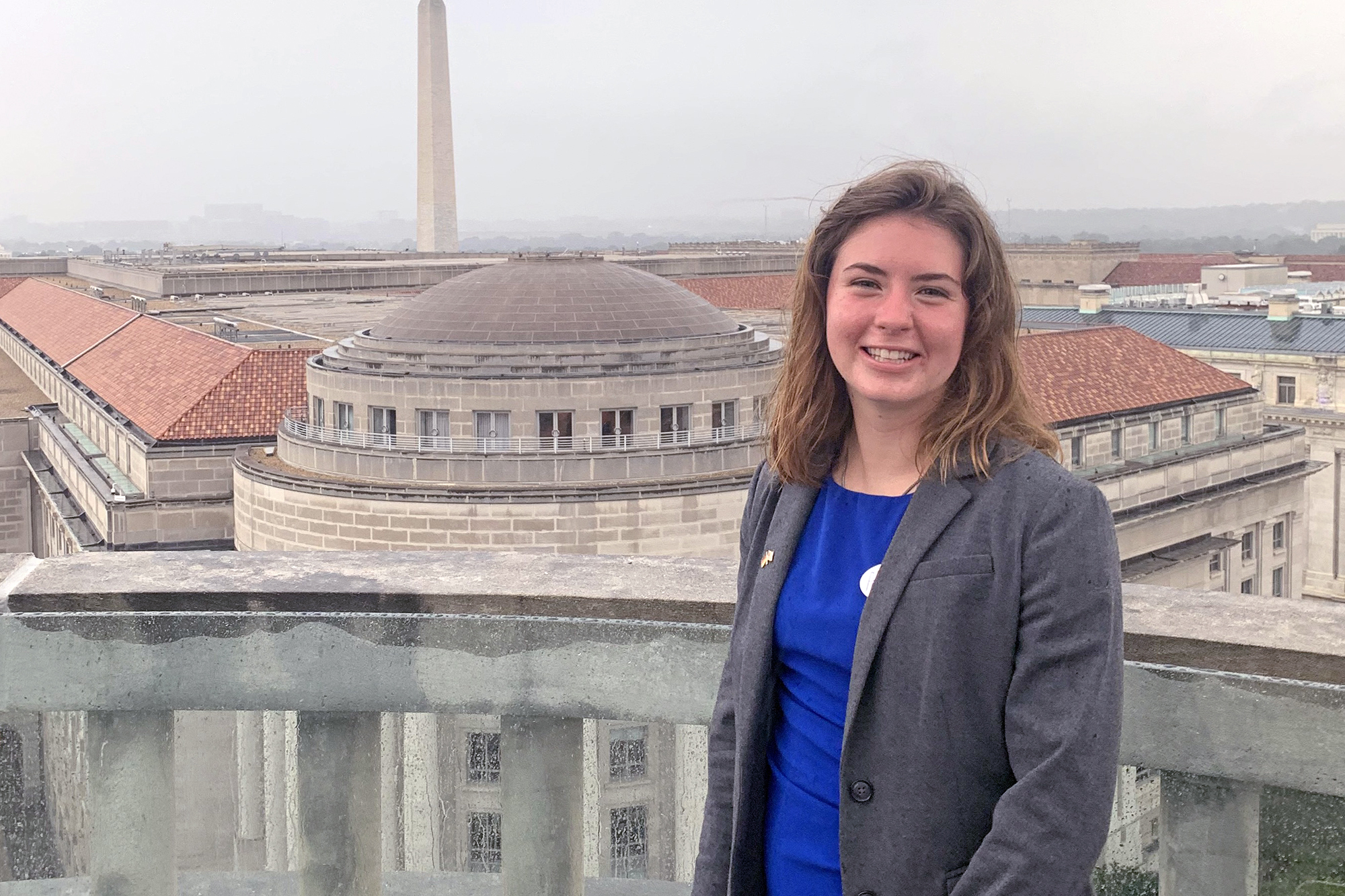 Editor’s note: This is one of three stories featuring College of Agriculture and Life Sciences students who served as 2022 Borlaug-Ruan International Interns during the summer. The internship program, offered through the World Food Prize Foundation, places students in organizations around the world to work with eminent researchers and policymakers to analyze agricultural, nutritional, health, economic and environmental problems from a global perspective.

Over 300 students have been Borlaug-Ruan International Interns since the program was established in 1998. This year, the World Food Prize offered 23 internships to undergraduates from across the country. The majority of their work experiences were remote due to the lasting effects of COVID-19.

Read the stories of the other interns, Idania Carillo-Martin and Rachel Currant.

Molly Simmons, junior in environmental science and global resource systems, worked for the International Fund for Agricultural Development (IFAD) of the United Nations in Washington, D.C. as a Borlaug-Ruan Intern. This intergovernmental organization allocates funds to rural communities in other countries, helping small-holder farmers improve their crop production and gain access to food markets.

Simmons spent her summer speaking to congresspeople about IFAD’s Crisis Response Initiative. The main purpose of this act is to provide immediate relief to people who have been directly affected by the war in Ukraine and energy markets; however, the underlying goal of the initiative is to find long-term solutions for global food insecurity.

“A lot of our messaging regarded the fact that if the grain blockade in Ukraine were to end today, there would still be a global food insecurity crisis,” Simmons said. “What’s unique about IFAD is that it focuses on building resilience in international communities, so when the next crisis hits, people will be able to absorb the shock.”

Simmons also lobbied for the Global Food Security Reauthorization Act. This bill funds the United States Agency for International Development’s (USAID) Feed the Future Initiative, which closely aligns with IFAD’s mission. She encouraged lawmakers to amend the act to include language about climate change and its impact on agricultural production worldwide.

Even though most of her work was done remotely, Simmons was able to travel to Washington, D.C., for the InterAction Conference in June. This event brings representatives from non-governmental organizations together to network and establish collective goals for international development.

“I spent the conference listening to panelists from agencies like USAID, the FAO, and Millennium Challenge Corporation, and I learned a lot about famine and hunger happening around the world right now,” Simmons said.

Despite growing up in a farming community in southwest Iowa, Simmons hasn’t always been interested in agriculture. Instead, she was more curious about ecosystems and biodiversity. It wasn’t until she participated in the World Food Prize Iowa Youth Institute as a senior in high school that she discovered how regenerative agriculture essentially combined both of these concepts into one.

Simmons went on to attend the Global Youth Institute in 2021, making her eligible to apply for the Borlaug-Ruan International Internship. After working for IFAD, she believes teaching farmers about regenerative agriculture could be key to reducing global food insecurity.

“Overcoming this crisis is about mitigating problems in advance so we don’t have to keep spending money on humanitarian aid, which is temporary,” she said. “One thing that I learned from my job is that for every dollar invested in agricultural development, $3 in humanitarian aid is saved.”

Now that she is back on campus, Simmons is looking forward to applying her experience with IFAD to her education. She is especially excited for two courses she is taking this semester — AGRON 342: World Food Issues and GLOBE 211: Issues in Global Resource Systems.

“I’m hoping to use what I learned this summer to engage in discussions and further my understanding of those classes,” Simmons said. “I’m also involved with the International Association of Students in Agriculture and Related Sciences (IAAS), so I want to use my background from this internship to connect club members to similar opportunities.”

Simmons expects her internship will guide her professional career as well. Although she had to step outside of her comfort zone at times, she developed a passion for advocating for others.

“I was skeptical of my ability to do well in this position because I knew I would see some difficult things, but I realized that I’m strong enough to do this kind of work, and I want to do it for the rest of my life,” Simmons said.