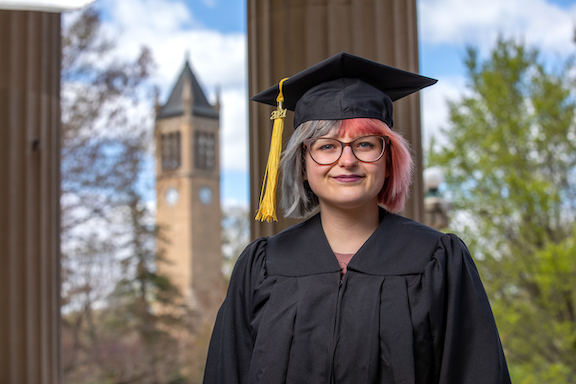 When Lexie O’Brien offers congratulations to her fellow graduating seniors this spring, she will encourage them to celebrate the strengths gained from their diverse experiences as they head out into the world.

O’Brien, from Des Moines, Iowa, decided to major in microbiology after watching a zombie movie in high school. Her college career has included many high points, like exploring her passion for research and playing flute and piccolo in three campus bands.

She’s had some very low points, too. Those include dealing with a hearing disorder identified when she was a sophomore. That same year, her father tragically died of cancer just a month after being diagnosed. Despite such significant challenges, she has forged ahead and thrived academically.

“I struggled at first in college,” O’Brien said. “My big turning point was being given the chance to try hands-on research.” She’s had several such opportunities, thanks to supportive faculty and staff who have made it possible, among them Joan Cunnick, professor in charge of the microbiology undergraduate program, and Leanor Leandro and Nick Peters, faculty in plant pathology and microbiology. Currently, O’Brien is testing therapies based on COVID-19 for human respiratory syncytial virus (RSV), in the lab of David Verhoeven, an assistant professor of veterinary microbiology and preventive medicine. 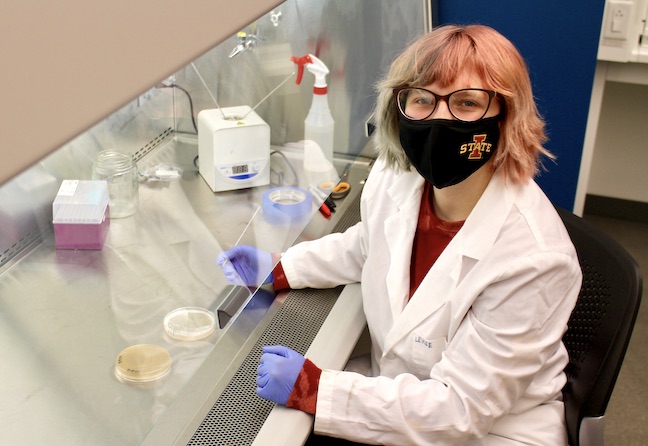 Like her peers, O’Brien has had to cope with COVID’s unprecedented threats to everyone’s well-being, on and off campus. For her, those impacts have included setbacks to lab projects, widespread mask-wearing that made lip-reading impossible and restrictions on gathering with her musical communities. She’s found silver linings, though, such as having more time to pursue artistic interests, like starting a Twitch channel, PurpleMoonLexie, where she shares her loves of art and science with followers from around the world.

O’Brien will soon wrap up her projects and head to Boston with plans to attend graduate school.

“We’ve all learned more about how unpredictable life can be,” O’Brien said. “I hope it encourages us to make the most of our opportunities and to appreciate those who have helped us along the way.”

On May 8 at 9 a.m., the College of Agriculture and Life Sciences will share O’Brien’s remarks online just as the college’s in-person graduation celebration begins in Jack Trice Stadium. The video featuring O’Brien and Endowed Dean’s Chair Daniel J. Robison will be released on the College of Agriculture and Life Sciences Facebook page then made available at www.cals.iastate.edu/convocation. The in-person celebration does not include a student speaker. All Iowa State University in-person graduation ceremonies will be live streamed and available to watch at a later date at https://www.graduation.iastate.edu/