College contributes to Cabinet of Curiosities 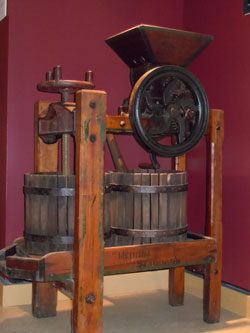 This antique cider press, original to ISU's Horticulture Farm, was innovative in preserving apples before refigeration was available.

When we see an apple we associate it as a healthy snack. At the Cabinet of Curiosities exhibit, located in the Christian Petersen Art Museum in Morrill Hall, an apple is identified as a symbol of education.

The Cabinet of Curiosities was designed to exhibit odd and peculiar artifacts from collections across Iowa State’s campus. (Beware of the large gorilla skeleton as you make your way through the museum…)

The College of Agriculture and Life Sciences loaned two items to the collection. An antique apple cider press is one of them, and represents the rich history ISU has related to apples.

Apple trees have always been significant to ISU and the horticulture department, so this isn’t your average cider press. The Chieftain apple, developed at Iowa State by Professor Spencer Beach in 1917, is grown at the ISU Horticulture Station today, sold to ISU Dining and eaten by hungry students each fall.

The cider press is original machinery of Iowa State’s Research Farms. It was used for researching the most efficient ways to make apple cider, and for the enjoyment of the horticulture department’s faculty and students. Before refrigeration was available in households, making apple cider was the only way to preserve the sweet treat.

Before it was loaned to the Cabinet of Curiosities, the press was displayed in Nick Howell’s office. Howell is the superintendent of the ISU Horticulture Farm. “I enjoy looking at it and it’s out of the way of regular farm activities,” he said. It was previously stored at the Horticulture Research Station since 1967, and was found with a similar cider press in 2006.

The cider press has a hand-crank grinder that was used to crush apples. The front basket of the press collected the ground apples and was then slid back below to further crush the apples. Typically, a second bucket would be placed under the trough to collect the cider.

Corn shellers such as this one were used to shell ears of corn for some of the earliest corn breeding at ISUs Northern Research Farm.

The second item loaned to the collection from the college is approximately 80 to 110 years old and represents an important facet of Iowa agriculture: an antique corn sheller.

The corn sheller is originally from the oldest outlying ISU research farm, the ISU Northern Research Farm, which was established in 1930 near Kanawha in north-central Iowa. The ISU farm, which is owned by a local group, the North Central Iowa Research Association, was created to conduct research and address problems specific to farmers in northern Iowa. The farm has been a longtime site for ISU corn and soybean breeding research.

In the old days, certain ears of corn were held back each fall and saved to use as seed. The ears were dried through the fall and winter months. Once planting season arrived, the hand sheller was used to shell the tip kernels off the dried ears of corn. Tip kernels were smaller and irregular in shape compared to the remaining kernels, which were flat.

Although it is a small cast iron tool, roughly three inches tall and 2.5 inches wide, the corn sheller packs rich history behind its antiqued exterior.

Flat kernels were more suitable for planting due to the early mechanical corn planters at the time. Many of the kernels shelled from the antique were used for some of the earliest traces of corn breeding. Many of the various new strains of corn were later raised for seed as well.

Three talks will be given throughout the semester about items displayed in the collection. On Friday, March 8, Howell will represent CALS and discuss the history of the cider press. It will begin at 3 p.m. in 1017 Morrill Hall.

The collection runs through April 21. The cost is free, however a $3 donation is encouraged.