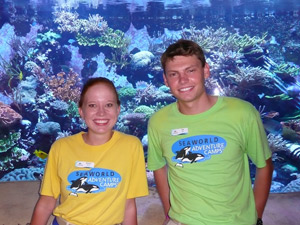 Interacting with beluga whales, polar bears, manatees and dolphins were part of the summer’s daily routine for two ISU College of Agriculture and Life Sciences students.

Paul Fenton and Breanna King, both juniors in biology, spent their summers as camp counselors for the Adventure Camps at SeaWorld in Orlando. The paid internships took place from May 24 to Aug. 7, and included a variety of different tasks.

Fenton, from Eddyville, Iowa, said they help the campers from throughout the United States and around the world get situated and feel comfortable with one another. They lead campers through the animal exhibits, take them to the shows and enjoy the rides. Campers also visit Aquatica, the waterpark, and Discovery Cove, where they swim with dolphins.

The goal of each camp is to teach the roles each animal has in its environment, why the animal is at SeaWorld, and what people can do to help the animals and their habitats.

“I love when you can see in the campers’ faces that they have seen something that has changed their perception about the ocean and what they can do to help,” said King, who is also double-majoring in animal ecology and is a native of Springfield, MO. “It is so important for us to stress how we have to take care of the oceans and seeing the animals being rehabilitated really helps.”

Adventure Camps are for students from fifth through 12th grade, with an average of 20 to 25 campers per session. The camp for fifth and sixth graders is called “Ocean Explorers,” where they learn the basics about the animals.

Groups in seventh through ninth grade and tenth through 12th grades take part in “Career Camp,” where they are also taught the requirements needed for working with the animals. Campers also get to sleep at the exhibits for two of the nights during their week stay.

“The most rewarding part of my internship is getting the kids excited about marine wildlife and teaching them how they can help conserve these amazing animals,” said Fenton. “There is never a dull moment!”

King said, “I love interacting with the juvenile killer whales. I like seeing the manatees that have been hit by boats being able to swim like they weren’t hurt at all. I like watching the newborn sea lions waddle around for the first time. It’s the little moments that made this internship for me!”