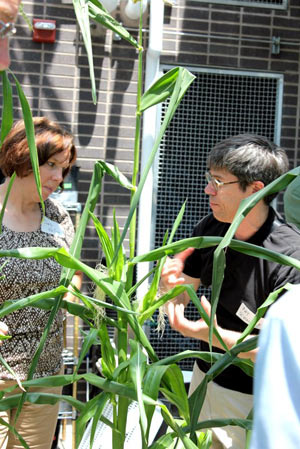 To Patrick Schnable, the recent sequencing of the corn genome is akin to the Louisiana Purchase.

“The U.S. government invested in new territory, just as we spent money to sequence the genome,” Schnable said. “The genome project generated lots of new information – but now we need to invest to explore what we bought, just as Lewis and Clarke were hired to explore the new land. It’s important to do this research with all the many new and emerging challenges in agriculture.”

If Schnable has his way, this exploration will increase yields, improve soil quality and combat climate change.

Schnable, Baker Professor of Agronomy and director of the Center for Plant Genomics, spoke with a group of Iowa Corn Growers Association members during a July tour of campus.

Schnable has been studying the corn plant’s recently revealed genetic blueprint and made a startling discovery: One inbred corn line may completely lack hundreds of genes present in another line.

“We believe these missing genes may explain some of the hybrid vigor we see in maize,” Schnable told the visiting corn growers. “You bring together a full set of genes when you make a hybrid.”

He said two maize varieties can show as much DNA sequence variation as that observed between two completely different species. “We can use that genetic diversity to understand the maize genome – and mine that diversity to make better crops,” Schnable said. While breeders have been successful at improving corn traits via traditional breeding, he said a better understanding of which genes are missing and which are important in hybrid combination could speed development of new hybrids with sought-after traits, such as drought and insect tolerance.

Scnhable, one of the principle researchers involved in sequencing the corn genome, organized the tour of his lab for the Iowa Corn Growers Association to highlight corn genomics research at Iowa State and speak on the importance of funding new work to help interpret corn DNA.

Ten corn growers attended the tour, which featured a walk-through of the Plant Sciences Institute’s genomics technology facility and talks on corn genomics research, use of social media in maize genetics and the MaizeGDB corn biology database. The day also included a visit to the corn genetics greenhouse at the Carver Co-Lab and an afternoon field trip to the USDA North Central Regional Plant Introduction Station.

Schnable said he included the talk on social media because he believes engaging the public in discussion on corn genetics research is vital to educate people and strip away fears that have often prevented new and potentially life-saving crop biotechnologies from reaching the field.

“We need to change the public conversation of GMOs. We need to stop talking about the demonstrated safety of this technology and emphasize its benefits,” he said. To illustrate, he explained how vitamin A-enhanced golden rice is set to be released in India in 2012 — but that 500 million people there will have died from vitamin A deficiency in the 12 years since it was developed because of approval delays over fears of its safety.

“If we’re trying to prevent a disaster by regulating golden rice — but that many people die in the process — we lost right at the beginning,” Schnable said.

Ultimately, Schnable told the corn growers that the purpose of sequencing corn genes was “to get better traits into fields.” He said the discovery that inbred maize can contain large numbers of low diversity regions has a huge implication for plant breeding.

“Regions with no diversity means there’s nothing breeders can do anymore and we need to think about other technologies, like transgenetics.”

Another project featured on the tour is looking at how changing lignin concentration in corn could help combat climate change while boosting soil organic matter by slowing decay of stover. He said the new corn technology could give growers a valuable tool if a cap-and-trade system is implemented in the United States.

A Visit to the Plant Introduction Station 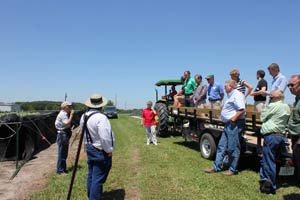 As part of the tour, organized by Patrick Schnable, the Iowa Corn Growers Association members visited the station, which is one of four plant introduction stations and more than 20 active germplasm conservation sites in the U.S. National Plant Germplasm System. The station is also one of the world’s primary repositories for hundreds of ancestral and inbred corn lines that comprise part of the planet's rich corn genetic inheritance.

Iowa State is a collaborator in the station, along with the USDA Agricultural Research Service and 11 other north-central region agricultural experiment station universities.

After witnessing the wealth of corn diversity preserved in cold storage at the station, ICGA tour members boarded a wagon for a tractor’s-eye view of maintenance, research and breeding plots planted at the station.

In addition to preserving the genetic diversity of thousands of maize and other crop varieties, curators at the station work to maintain regionally adapted crop diversity traits and develop new ones. Upon request, the station also distributes germplasm to researchers and educators both nationally and internationally.

Among the plots visited, tour participants saw corn planted under a shade cloth and in a photoperiod control structure. Both are efforts to adapt an exotic-temperate corn cross to regional light conditions so plants can be used in competitive breeding programs.

The day concluded with a stop at the station’s “2,842 plot”, where each inbred corn line in the station’s collection is planted as part of a collaborative effort with a USDA genomics lab in Ithaca, N.Y., to study traits suitable for adaptation, such as flowering, plant and ear height and number of plant leaves.