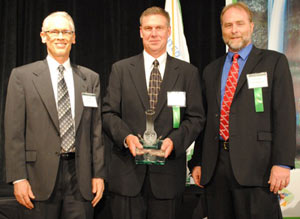 John Clarke, middle, holds the award presented at the 15th Presidential Green Chemistry Challenge Awards Ceremony. Joel Coats, left, Iowa State professor of entomology and toxicology, and Iowa State alum Ken Racke of Dow AgroSciences, who worked with the company on the development of Natular, at the award ceremony.

Alumnus John Clarke, president and CEO of Clarke Mosquito Control, has been presented a Presidential Green Chemistry Challenge Award for his company’s work on a less toxic way to control mosquitoes.

The Environmental Protection Agency presented Clarke with the Designing Green Chemicals Award, which he accepted on behalf of his company. The awards ceremony took place June 21 in Washington, D.C.

The company developed Natular™ as a larvicide that is effective in water. Application rates can be lower than traditional synthetic larvicides, are not toxic to wildlife and do not persist in the environment.

Clarke Mosquito Control began commercial production of Natular in 2009 and has been accepted for use in the United States and overseas.

Clarke earned his doctorate in entomology from Iowa State in 1988.