The ISU Registrar maintains a set of frequently asked questions on differential tuition at the following web site:  http://www.registrar.iastate.edu/fees/tuition-faqs/undergrad-faqs

The College of Agriculture and Life Science has added the following information that addresses topics students have raised:

Who pays differential tuition in CALS?

Tuition rates are set by the Board of Regents, State of Iowa. The rates vary by residency status (resident, non-resident, or international), level of study (undergraduate, lower/upper division, graduate, or professional), and field of study.

Tuition rates for part-time students (those taking 11 or fewer credits in a semester) are pro-rated and assessed on a credit hour basis. Students taking only online courses are assessed resident tuition rates.

*Differential tuition for these programs will be charged beginning with the Summer 2017 semester.

**Number of semesters includes summer, and counts regardless of registration status.

***If entry term is summer, fall counts as the semester waived regardless of registration status.

Many students earn a substantial number of college credits in high school, but in some cases, not all of those credits may transfer to the their degree programs. However, students entering Iowa State directly from high school will pay the higher tuition rate no earlier than their seventh semester (regardless of enrollment), even if they have more than 60 credits due to credit earned in high school.

Students in programs that charge higher tuition typically begin paying the higher rate as junior and seniors (upper division status), once they have completed 60 credits. This is the point where much of students’ coursework is concentrated in their major.  Upper division status is evaluated at the beginning of each semester. A student with 57 credits at the beginning of the semester, for example, would not pay the higher rate.

Differential tuition will also be assessed for summer semesters.  However, most students typically take only 1-2 classes during the summer, so in those cases the higher rates would be assessed per credit hour.

How much differential tuition will students pay?

For the majors with differential tuition, the costs will be phased in over three years starting with the 2017-18 academic year. For juniors and seniors in Animal Ecology, Animal Science, Biology, Dairy Science, Forestry, General Pre-Vet, Genetics and Microbiology, here are the differential tuition amounts for the next three years during the phase-in period:

In future years, this amount will be adjusted by the same annual percentage increase as the university’s base tuition.  Once students are eligible to be assessed differential tuition, they will pay differential tuition each semester until they graduate.

How will CALS invest revenues from differential tuition?

Student advisory committees will be established in each department or interdepartmental program to provide input to the department chair on the use of these funds. In general, the college intends to invest to sustain or improve the learning experience for students in majors where differential tuition is charged. Examples of investments may include:

How does the cost of Iowa State University’s tuition and mandatory fees compare to peer land grant universities?

The chart below compares the 2016-17 tuition and mandatory fees paid by undergraduate resident students at the universities considered to be peers of Iowa State in high-quality, land-grant university programs. Iowa State is consistently one of the least expensive options among our peer institutions. 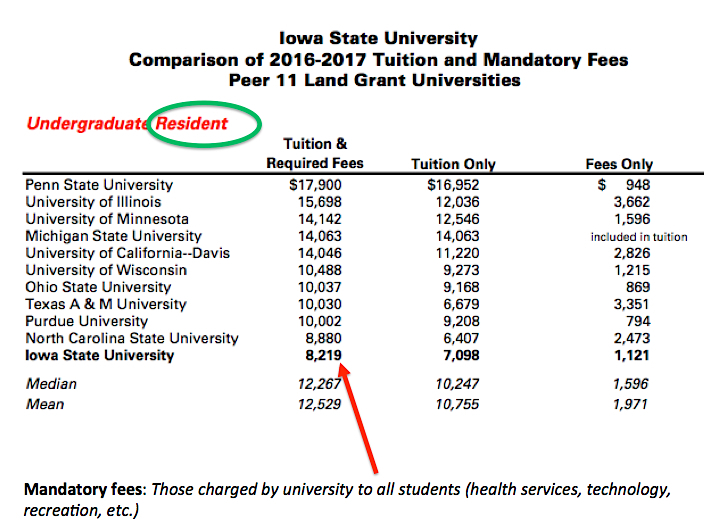 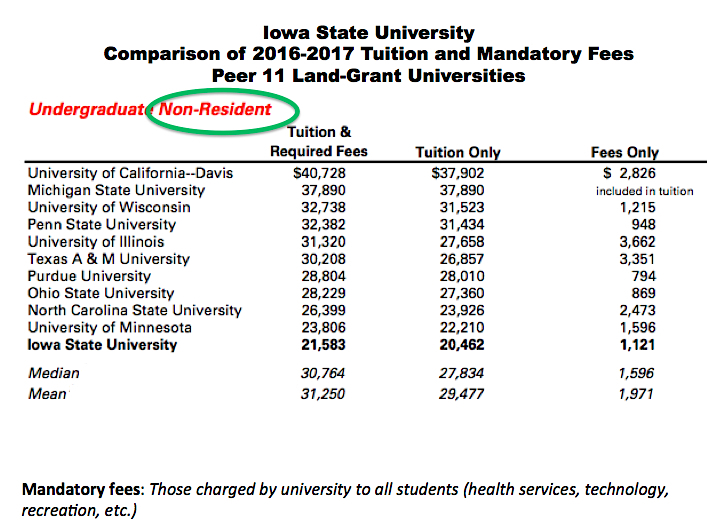 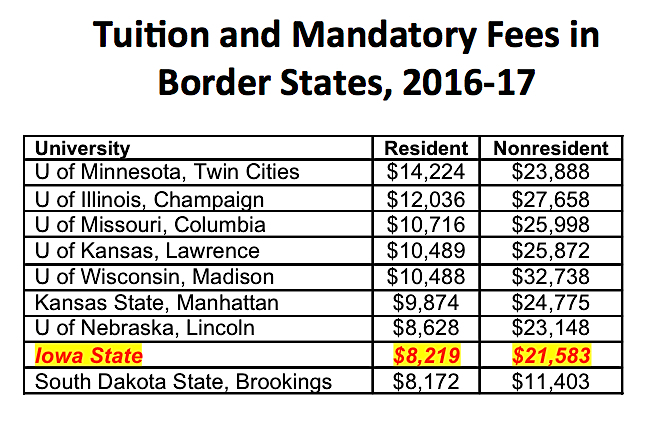 I have been awarded a full-tuition scholarship; will this cover my differential tuition costs?

Yes, these awards cover the full tuition regardless of major and will therfore cover differential tuition once it is assessed.

What is the college doing to ease the financial burden on its students?

CALS and its departments awarded more than $3 million in scholarships in 2016-17 to its students. CALS is raising additional private funds from alumni and friends to increase the number of scholarships for students.

How do I appeal a differential tuition charge in CALS?

If a student does not feel he/she has been appropriately charged differential tuition, the student has the right to appeal the tuition charge. For consideration, all tuition appeals must be submitted by 5 p.m. on the tenth day of classes. A committee will review each individual appeal submission, and render a recommendation. Notification of the decision will be sent to the student’s university email account within two weeks of the submission deadline.

If you have further questions or wish to submit an appeal please contact: